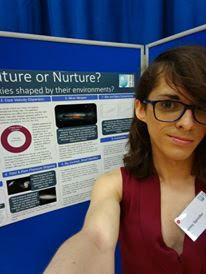 I’m a PhD student studying Galaxy Evolution, in particular the role of galaxy environments on how they effect the formation of new stars. I use data from the MaNGA Survey (Mapping Nearby Galaxies at Apache Point Observatory), which is a brand new survey which uses a new technique to produce spatially resolved spectrometry.

For my undergrad I did a MPhys in Physics and Nuclear Astrophysics at the University of Surrey, I then stayed at Surrey for a further year and studied for a MSc in Space Technology and Planetary Exploration. I started at the OU in 2014.

I actually applied for my PhD before I came out as trans professionally, so I don’t think there has been an opportunity for my career decisions to be affected. I certainly never considered my sexuality as something that would hold me back and going forward I have no intention of letting my Gender Identity get in the way!

I’m lucky to have had an almost 100% positive experience, with the exception of an occasional slip of the tongue misgendering I haven’t ever had a bad experience at work. Even travelling to the United States for a conference I was lucky to not have an trouble with my identity.

This is going to sound a bit silly, but I always looked up to Samantha Carter in Stargate SG-1. I realise she’s not a real person, but just having a female character who was not only a military officer, but a double PhD, a total badass and a strong female was amazing and a real inspiration for me pursuing a career in science

Right now I just want to finish my research and get my Thesis written! After that, I still need to work out if I will stay in academia and continue on with Post-Doc work or flee to the real world.