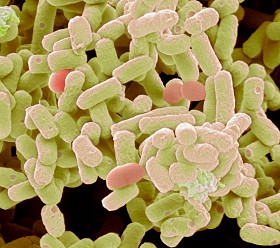 I look at how the gut microbiome (mostly the bacteria and viruses that inhabit our intestine) affects humans and other animals in health and disease, using a mixture of wet-lab work and computational biology.

My route to my current job has been … um … convoluted. My first degree was in microbiology. I did a stint in the lab, then went into scientific publishing (working for the Microbiology Society). A few years of reading and copy-editing other people’s work made me realise I wasn’t the waste of space I’d been led to believe. I was fortunate that Professor Glenn Gibson at the University of Reading gave me the opportunity to put in for industrial funding, which led to me getting my PhD funded to look at the effect of an anti-obesity therapy on lipid metabolism of gut bacteria. Biggest thing for me career-wise was (finally) getting diagnosed with a mental illness after having lived with it for 25 years. Diagnosis (in 2007, during a particularly fraught period during my PhD) was the best thing that ever happened to me. Suddenly everything made sense! I understood for the first time why I was crap at exams, completely incapable of dealing with stress, and had a hedonistic streak. This allowed me to develop coping mechanisms, and – for want of a better word – ‘blossom’ academically from my mid-30s onwards. (I should also add things would have been very different if I hadn’t had amazing support from my wife over the last 19 years.) I was awarded a Government of Ireland Postdoctoral Fellowship to study viruses in the human gut during the final year of my PhD. The Fellowship gave me the opportunity to think long and hard about what I wanted to do with the rest of my career. I’d always been an amateur computer geek so decided to retrain as a computational biologist so I could integrate -omics technologies into my research. An MRC Advanced Course Studentship allowed me to do this at Imperial College London. My MSc dissertation project led to me being taken on as a postdoctoral research associate in Bioinformatics and Translational Systems Biology in the Department of Surgery and Cancer. After just over 2 years in this role, I became a Lecturer in Microbiology at the University of Westminster. The opportunity to apply for my current Fellowship came up about 10 months into my lectureship, and I took it with both hands.

No, to a large extent. My mental health issues have had far more of an effect on my career decisions than being gay. But it was definitely a factor (along with not being able to be as involved in research as I liked) in deciding to go back to a Fellowship after securing a tenured position. The environment I was working in meant I had to stay in the closet to a large extent, and I found myself playing the pronoun game again. I’m too old for that nonsense! That doesn’t mean me being gay is the first thing people find out about me, but I’m not going to avoid or change the subject any more. Though it’s still sometimes difficult to find the appropriate opportunity to correct someone when they assume your wedding ring means there’s a husband at home.

If there have been good or bad reactions, I don’t know about them. A senior member of staff outed me to a few colleagues some time ago. When I found out about that I was livid: it wasn’t their decision to make, but I wasn’t in a position to challenge them about it. Hopefully they’ve now done the Equality & Diversity training they expect all their staff to do. 😉

I’ve been obsessed with music from a young age, and growing up most of my heroes were gay (Freddie Mercury, Jimmy Somerville, Marc Almond, Dusty Springfield, Pete Shelley, Andy Bell, Michael Stipe) or gay icons (Annie Lennox in the video for Love Is A Stranger was my ‘Top Of The Pops Starman moment’). The first out lesbian I looked up to when I was younger was Sophie Ward: her coming out in 1996 had a massive effect on me. Out lesbians were pretty thin on the ground prior to that: Sandi Toksvig, Billie Jean King and Martina Navratilova being the notable exceptions. From a career perspective, my role model was Professor Ray Dils. He was my tutor during my undergraduate degree at the University of Reading. A wonderful man who taught me a lot about science, empathy and supporting those in your charge.

To make a success of my Fellowship, and secure funding beyond the end of its tenure to allow me to continue working on what interests me. Continue to maintain a work–life balance that keeps me sane and healthy.