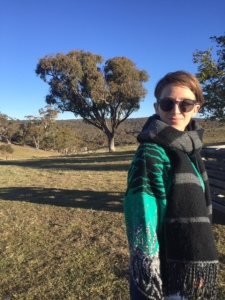 Pick some letters: B

There are many products that are best made by cells, not by humans (think of insulin, which is made in our pancreas cells, which we somehow need to manufacture for diabetics). Cells can be used to produce these products by engineering their genomes. The cells which we are interested in developing as cell factories are microalgae cells, because they are cheap to culture, grow fast, safe to use and potentially more sustainable than current cell factories (being photosynthetic). Unfortunately, microalgae don’t like making lots of something they don’t need (like insulin). My research is looking at how we can genetically engineer them to be better at making products they don’t natively make. Hopefully, this will result in better cell factories for producing any one of the thousands of products we need, but can’t make easily ourselves.

I did a BSc majoring in Biochemistry and Human Physiology at UCT, South Africa. I also did my Honours degree in Molecular and Cell Biology there. After that I was determined to “get a job related to my degree” and saw academia as a continued form of study (not it’s own type of career path). So I moved to London and got a job as a research assistant at UCL Institute of Ophthalmology with Prof Steve Moss. Here we worked on developing a therapeutic antibody for treating blindness (AMD) and were also looking at its role in treating cancer. I loved that job and that team and spent 2.5 years there! It was during that time that I got really familiar with academia as a career, realising I could continue my love for research by completing a PhD.

Working in university settings which generally promote progressive, accepting cultures, I haven’t had any negative reactions. But I have had reactions.

Mentioning I am bisexual is still something I don’t feel I can do with just anyone at work. My worries include: Do they assume I am polygymous or overtly sexual outside of work? Do they think it’s a phase? Do they think I’m oversharing? I worry about these things because they are all thoughts I would have had, had I not spent a significant amount of time actively questioning these assumptions and stigmas around bisexuality. As someone who identified as straight for a lot of my life, I really do understand that thought process and consequently, I fear it.

No one in the workplace has ever treated me badly regarding my sexuality. And I do believe if I was being treated badly for my sexuality, none of the people I have worked with would tolerate it, because they all know it’s wrong. But not having to deal with negative comments is the first step to equality. The next is to a point where stigmas don’t exist. Because even though I have accepted myself, it wasn’t an easy or quick process. It was still an acceptance of something; a tolerance, an admittance to a less normal self.

Lots of people at different points in different ways!

I have a strong interest in science communication (particularly public engagement) which is why I hadn’t really wanted to pursue the academic path. But I realised that I could use the platform of a PhD to not only continue doing cool research, but also to take advantage of the opportunities in the university setting to develop as a science communicator. So where to from here I still don’t know, but I know I’ve got the option of two loves: communication and research.

To add to the workplace stigma/acceptance issue… it’s been an interesting time for me because currently I am based at UTS in Australia, where same sex marriage is being “considered” (for lack of a better word). It’s been surprising to see people in my workplace who are welcoming and treat me as an equal, but who I know are voting against equal marriage. It’s interesting that people see a difference between treating me equally as a bisexual person at work, but not according to the law. It’s a reminder that people will still discriminate and that we are not quite there yet in terms of being accepted, even though blatant homophobia has reduced in the workplace.