you can read Rob’s previous interview from 2015 here. 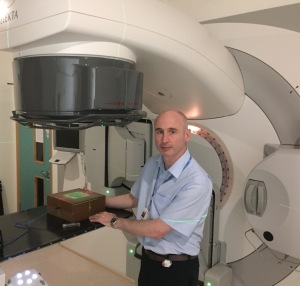 The Medical Physics Department at Leeds comprises five scientific sections: Radiotherapy Physics, Clinical Engineering, Radiology Physics and Nuclear Medicine & MRI; hence my role as Head of Department is incredibly varied, but I am fortunate in that I still have to do some practical, hands on science in radiotherapy physics. I find this aspect of the work particularly rewarding as after a long day working on a linear accelerator, for example, there’s a real sense of a job well done. In addition, if you have a trainee physicist with you, it’s a really good opportunity to demonstrate how the theory translates into clinical practice and help consolidate their learning.

As well as the day-to-day physics and training, I am also responsible for the overall departmental strategy for and overseeing the research, development and governance by making sure that new techniques and service improvements are implemented in a way that improves patient outcomes without compromising patient safety. This often involves working with many different staff groups, be they surgeons, pathologists, radiographers etc, this is especially so, as I am the lead for the capital equipment programme. Members of our profession are seen as innovators and often have to take the lead in bringing new ideas to fruition and into clinical service.

My role also entails working professionally at the regional and national levels and am involved with work on EDI with the Office of the Chief Scientific Officer at NHS England. I am heavily involved in education at a number of levels working with colleagues from a variety of organisations, including Health Education England, and have recently led the development of a Level 7 Clinical Scientist I am also an assessor for candidates applying for entry onto the Health and Care Professions Council (HCPC) register via either the Association of Clinical Scientist’s routes, or the Academy of Health Care Science’s equivalence route.

I am also involved with my professional body, the Institute of Physics and Engineering in Medicine, and am currently the President Elect, and will be taking up the presidency from September 2021 and, as far as I am aware, I will be the first out LGBTQ+ IPEM President; something I really wouldn’t have believed, if I had been told when I entered the profession.

My route to my current position is somewhat atypical. My first degree was in chemistry at the University of York where I remained to do a D.Phil in physical organic chemistry. This ignited my interest in Electron Paramagnetic Resonance and free radicals (I remember being fascinated by magnetism as a child and even at 14 being totally unsatisfied by the ‘O-level’ domain theory of magnetism, my question being “so what makes the domains magnetic?”). I then spent two years at the Unversitaet Zuerich studying fast, free radical reactions by laser flash photolysis and optical modulated absorption spectroscopy as a post doc, although there was plenty of EPR within the group to maintain my interest. I then moved to the EPSRC National Electron Nuclear Double Resonance (ENDOR) Service in the Chemistry Department at Cardiff University, again as a fellow, where I spent seven years studying a wide range of systems: free-radicals, transition metal complexes, colour centres, etc., etc. My special interest, common to many projects, was using ENDOR spectroscopy to obtain structural information from disordered systems, such as polycrystalline powders and glassy frozen solutions, using a technique known as magnetic angle selection. During this period I also undertook a PGCE for Higher Education, which has stood me in good stead over the years.

Anyway, the realisation that I wanted to remain a hands-on scientist; the fact that, in practice, I was doing more physics than chemistry; and wanting more security than a continual series of fixed term contracts led me to medical physics. Originally, I was thinking in terms MRI; however, it was Radiotherapy Physics that really grabbed my interest. I therefore, embarked on the IPEM Grade A training, as it was then, in Stoke (and it was an excellent training experience) which also required undertaking an MSc in Medical and Radiation Physics at Birmingham University. I remained at Stoke for the second part of my training and, having obtained professional registration, continued there for a total of eight years, becoming a Medical Physics Expert (a role defined in law) during this time before moving to the Royal Shrewsbury Hospital as Head of QA and Dosimetry in Radiotherapy Physics. Although I was only at Shrewsbury a few years, I was fortunate in that it was an exciting period in which a great deal of service development was going on. Whilst at Shrewsbury, a similar role to the one I was already doing was advertised at a bigger centre in Middlesbrough. As both my husband and I had always intended to move back to North Yorkshire and despite it being a sideways move, I applied and was successful. After six years as head of department in Middlesbrough I moved to my current post in Leeds.

No, not at all

Certainly during my time in the NHS my colleagues have been absolutely great and I’ve never had a negative reaction that I can recall. Prior to that it was pretty much the same, though in the early days of my career I had a few negative comments, but those were different times!

Did you have any role models growing up (LGBT, STEM, totally unrelated.)?

As I was born before humankind had walked on the moon (but after the first human heart transplant, I hasten to add) and grew up in an era where there was only negative portrayal of gay people (men specifically – I’m not sure that the L, B or T let alone the + had even registered) and where pride marches were referred to on the news as “groups of homosexual demonstrators” and elicited tutting from those watching, there were no LGBT+ role models. However, it’s those groups of so-called homosexual demonstrators that enable men to write on their profiles that they and their husbands plan to have families and women the same with their wives; for that, they’re not so much my role models as heroes!

My scientific role models are Prof Bruce Gilbert, one of my D.Phil supervisors and Dr. Julia-Claire Handley my training supervisor and colleague at Stoke, now Head of Radiotherapy Physics at the Christie Hospital, both of whom are superb scientists with a really pragmatic approach.

I also have two scientific heroes namely Alan Turing (not specifically because he was gay) and Rosalind Franklin, two brilliant scientists in my opinion

At the moment, one of my personal goals is to work to make our professions far more inclusive than they are at present. This clearly not something that I can do alone and there has been considerable progress to date. I think now that more than ever, inclusion is being seen as essential, but there is still considerable work to be done.

Yep. I have been very fortunate to encounter some superb people (many of whom have become friends) both because of their scientific and technical abilities and also because of their attitude towards LGBT+ people. However, I would also like to say that it is an absolute privilege to work with my current colleagues, again because of their attitudes and because, without exception, they are all extremely talented. I’m proud of every one of them.

It is more than five years since I originally submitted my profile, and it has been wonderful to see organisations such as LGBTQ+ STEM flourish and see the impact that they are having, not only LGBTQ+ scientists but on the wider scientific community as well. The LGBTQ+ STEMinar is still my favourite event of the year.

And last, but by no means least, I need to say thanks to my husband, Andrew, who for the best part of twenty-five years has encouraged, supported and stood by me.